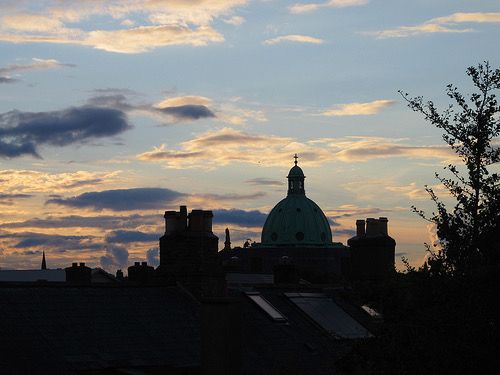 Dominating the skyline of Rathmines is the copper dome of the Catholic Church dedicated to Mary Immaculate, Refuge of Sinners.The story of the church began when Archbishop Daniel Murray officially constituted the parish of Rathmines on 12 December 1823 and appointed Fr William Stafford the first parish priest. The districts of Rathmines and Rathgar had hitherto formed a section of Parish of St. Nicholas Without, Francis Street. In fact Fr. Stafford’s appointment predated the church and his early Masses as parish priest were celebrated in his own home. He was assisted by a single curate, Fr. Barry.

The issue of where the parish church should be constructed was crucial. At that time, the entire stretch of land extending from the canal along the left-hand side of Rathmines Road as far as Richmond Hill had no buildings on it. Two acres, two roods and thirty-eight perches were purchased from the owner land, the Earl of Meath, in 1824. It was upon this site the foundation stone for the new Catholic church was laid by Lord Brabazon, heir to the Earldom of Meath. This Gothic Church measured 90 feet long by 37 feet wide with a height of 37 feet. It cost approximately £5,000 and it took five years to build, due the settlement problems with one of the walls. This first church was solemnly consecrated under the protection of St. Mary and St. Peter by Archbishop Murray on 15th August 1830. Some of the land originally purchased was eventually sold to obtain funds to finish the interior of the church.

The following year tragedy struck when Fr. Simon McCarthy, a curate in the parish since 1826, was drowned.

One year later, in 1832, Fr. Peter Richard Kendrick was appointed curate. Later, he left for the American mission. In time, he was consecrated Archbishop of Saint Louis, Missouri.

By the middle of the 19th Century the development of the city and the consequent increase in the Catholic population of Rathmines necessitated enlargement of the church.

In July 1848, a visiting missionary priest, Fr. Gentili of the Order of Charity, described some beautiful churches he had observed in Italy and called for the building of a new church in Rathmines. In September of that year, a public meeting was held to discuss the proposition to build a bigger church. Fr Stafford immediately donated £1,000 towards the construction costs. He did not live to see the fruition of the project – he died aged 81 on 2nd November 1848.

In December 1848, Fr. William Meagher was appointed Fr. Stafford’s successor as parish priest. Fr Meagher proposed Richmond Hill as a site for the new church but was outvoted. It was decided to retain the existing location with the church facing the main Rathmines Road. On 18th August 1850, the foundation stone of a new church was laid by Archbishop Murray, accompanied by the Bishops of Dromore and Down and Connor who were on their way to the Synod of Thurles. The church was to be built to the Byzantine model in the form of a Greek Cross, the first such construction in the Archdiocese of Dublin since Catholic Emancipation.

The new church, constructed around the original building was designed by Patrick Byrne. John Lynch (of Mount Pleasant Ave.) did the masonry work, the stone originating from quarries at Kimmage and Donnybrook. The granite was obtained from Ballyknocken. William Hughes (of Talbot Street) was responsible for the roof and the dome. Messrs. Hogan and Connolly (of what is now Pearse Street) executed the plasterwork.

Paul Cullen, who in 1866 was to becomes Ireland’s first cardinal, succeeded Daniel Murray as Archbishop in 1852. Following the solemn declaration of the Immaculate Conception as a dogma of Catholic faith on 8th December 1854 in Rome, at which he was present, Archbishop Cullen wrote to Fr. Meagher and directed him to inset the word ‘Immaculate’ in the title of the new church. The Archbishop also expressed his desire that it was to be proclaimed as a ‘Memorial Church’ to honour the definition of the Immaculate Conception in the Archdiocese of Dublin.Chalice presented by Archbishop Paul Cullen – 1856

In 1856, the church was completed with the exception of the portico and was solemnly dedicated by Archbishop Cullen on 19th June. It was a truly impressive occasion with sixteen bishops and two hundred priests present at the ceremony.

In 1878 Fr. Meagher began his last work, the erection of the magnificent portico, with its four massive columns and their carved Corinthian capitals surmounted by a beautiful pediment. The portico, except for the wings, was completed in 1881, the twenty fifth anniversary of the church. The statue ‘Our Lady of Refuge’ was taken from the central niche of the façade and raised to the eminent position it now occupies on the apex of the pediment. This statue, a work by James Farrell, had been shown at an exhibition in Dublin in 1853 and purchased by Fr. Collier, a curate in the parish. The statues of Saint Patrick and Saint Laurence O’Toole were then placed at the extremities of the portico. 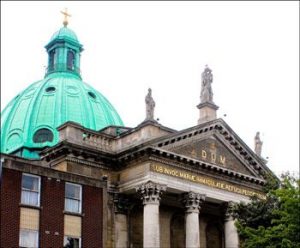 The portico was erected from Portland stone. The contract was given to local builders Meade and Son under the direction of Architects O’Neill and Byrne- also parishioners.

The letters D O M written in gold on the façade stand for the Latin words ‘Deo Optimo Maximo’ and underneath are the words ‘Sub Innov. Mariae – Immaculatae Refugi Peccatorum’. – ‘Dedicated to God the Most High under the invocation of Mary Immaculate, Refuge of Sinners’.

One of the unusual features of the church was that the floor was three feet below the street level but the exterior promenade afforded a vantage point for viewing processions and other functions. There were also a number of paintings adorning the walls of the Church. Fr. Meagher, by then a monsignor, died in 1881 and was succeeded in January 1882 by Canon Mark Fricker.

Shortly afterwards the district of Rathgar was detached to constitute a separate parish. Canon Fricker systematically set about improving the interior of the church. He raised the floor to street level, built the baptistery and a mortuary chapel, erected a High Altar, built a fine organ and refurbished the whole Church.

On 26th January 1920, the sacristan arrived to open the church for the 7am Mass to discover that the switch panel was on fire. He raised the alarm but the whole front of the altar was already in flames. The fire spread quickly along the electricity wires and Canon Fricker was forced to stand and watch helplessly as the church was devoured by flames. At 9am the dome collapsed, crashing to the ground with a sound that was heard for miles around. Only the shrine of Our Lady of Perpetual Succour and the sacristy escaped damage. Despite the flames, the curate, Fr. O’Loughlin succeeded in removing the Blessed Sacrament from the tabernacle. A local fireman, Jeremiah Lawlor, of the Rathmines Fire Station sustained a fractured rib as he attempted to contain the fire. As news of the fire spread, Archbishop Walsh and Alderman William T. Cosgrave of Dublin Corporation called during the day to offer sympathy to the parish priest.

The next day a heavy gale damaged two stained glass windows valued at £1,000.

The following week, on 5th February 1920, a public meeting to discuss the rebuilding of the church was held in the Mansion House. The Lord Mayor presided and those present included the Archbishop, the Lord Chief Justice and members of Dublin Corporation.

The architect, R.H. Byrne, was subsequently commissioned with the task of rebuilding the Church. In a short time the debris was removed and the restoration work began in earnest. A temporary roof was erected. The walls, although badly damaged, were found to be structurally sound, but the interior required considerable refurbishment. The façade was relatively intact. The cost of repairs was estimated at £35,000 but ultimately came to £55,000. 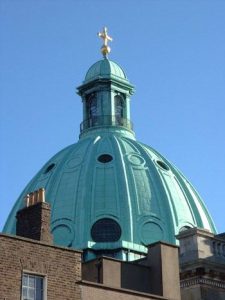 The outstanding feature of the reconstructed church was the dome. The previous dome, which was completely destroyed in the fire was replaced with a large copper dome which had been built in Glasgow some time previously. It was believed to have been destined for a Russian orthodox church prior to the Revolution of 1917.

He was succeeded in 1927 by Canon Fleming, a well-known Gaelic scholar. Having cleared the residue of the immense debt incurred on the restoration of the church Canon Fleming undertook many improvements. These included the beautiful altar, erected in the year of the Eucharistic Congress 1932, the magnificent ‘Last Supper’ baldachino, the imposing marble pulpit and many of the side altars.

Canon Fleming died in 1947 and Fr. John Neary who succeeded him served as parish priest until his death in 1960. Monsignor Michael O’Connell was then appointed parish priest and remained here until 1971. During his tenure the church was fitted with a heating system and in November 1970 the High Altar was changed so that the Mass could be celebrated with the celebrant facing the people. With Monsignor O’Connell’s transfer to the parish of Glasthule in 1971, Fr. John Peirce was appointed and served as parish priest until his death in 1984 when Fr. Aidan Burke was appointed.

As parish priest, Fr. Burke has overseen the redecoration of the church and the development of the grounds. He has also tackled the problem of dry rot in the building, under the guidance of Mr. Andrew Kavanagh, the parish architect.